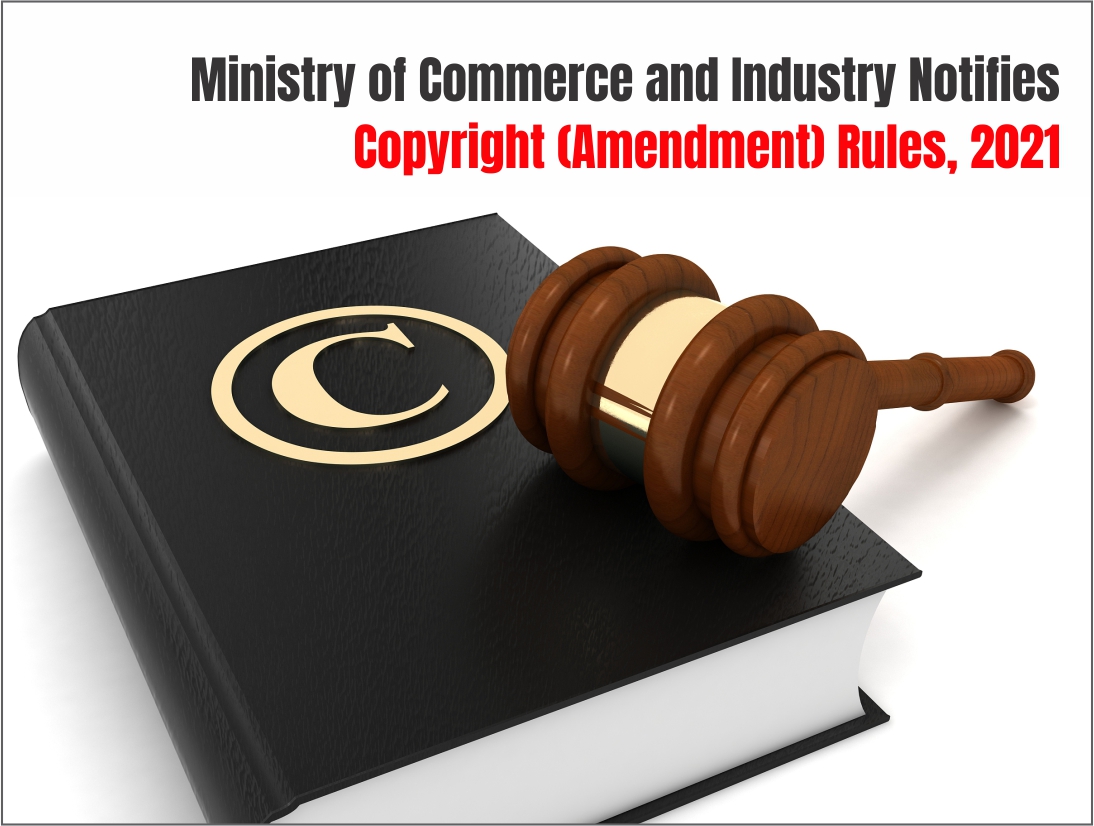 The Ministry of Commerce and Industry has recently notified Copyright (Amendment) Rules, 2021 vide Gazette Notification under reference G.S.R. 225 (E) dated 30th March, 2021. This power to amend existing rules and notify new rules has been exercised by the Central Government under Section 78 of the Copyright Act, 1957. The main objective behind introducing these amendments is to bring existing rules in parity with other legislations. It aims to ensure smooth and flawless compliance in the light of the technological advancement in digital era by adopting electronic means as primary mode of communication and working in copyright office. Many new provisions have been incorporated as well.

Copyright is a form of intellectual property right that creators have over their literary and artistic works. Works covered by copyright include books, music, paintings, sculpture and films, computer programs, databases, advertisements, maps and technical drawings. The copyright law protects only the expressions of ideas rather than the ideas themselves. Therefore, an idea is not protectable, but the way an author expresses his or her idea is protectable and given legal recognition under the copyright law.

Copyright (Amendment) Rules, 2021 have introduced some specific changes which have replaced the Copyright Rules, 2013. Many new provisions have been introduced such as provisions relating to  publication of copyrights journal have been incorporated eliminating the requirement of publication in official Gazette, provisions dealing with undistributed royalty amount and use of electronic and traceable payment methods while collection and distribution of royalties. Few new changes are discussed below.

Under the Rule 58, after sub-rule (10), the following sub-rules shall be inserted, stated as “sub-rule (11) which says that a copyright society must ensure that where the royalty cannot be distributed within the time specified in sub-rule (8) as the relevant author or other owner could not be identified or located; such royalties are kept separate in the accounts of the copyright society” and the other one being “sub-rule (12) which says that a copyright society must take all necessary measures to identify and locate the authors and other owners and must publish on its website, at the end of every quarter, the information about the title of the work, the name of the author and other right owners of the work, as available and any other relevant information available which could assist in identifying the right holder.” Also, another one being “sub-rule (13) which says that in case the royalty due to author and other owners remains undistributed at the end of the period of three years from the end of the financial year in which collection of the royalty occurred, the copyright society shall transfer such amount to the welfare fund of the copyright society.”

Under Rule 59, for sub-rule (7), the following sub-rule shall be substituted, stated as “(7) which says that the Chairman and other members of the Governing Council shall be elected for a term of two years and shall be eligible for re-election”. Under Rule 62, after clause (viii), the following new clause has been be inserted, namely “clause (ix) which deals with the annual transparency report as provided under rule 65A”.

Now moving on further and discussing about the Rule 82, the said rule shall be substituted which deals with the mode of communication by the copyright office, etc. This rule states that every written intimation from the board, the copyright office or the registrar of copyrights shall be deemed to have been duly communicated to any person if such intimation is sent to the known address of such person through electronic means or by registered post.

These are few changes but at Knowledgentia, our experts handle each and every kind of matter in relation with copyright. We believe in providing best copyright registration services in India for our clients. Be it the old rules or the new rules, you will not regret your association with us in copyright matters  as well as any matters concerning Global IPR Protection.