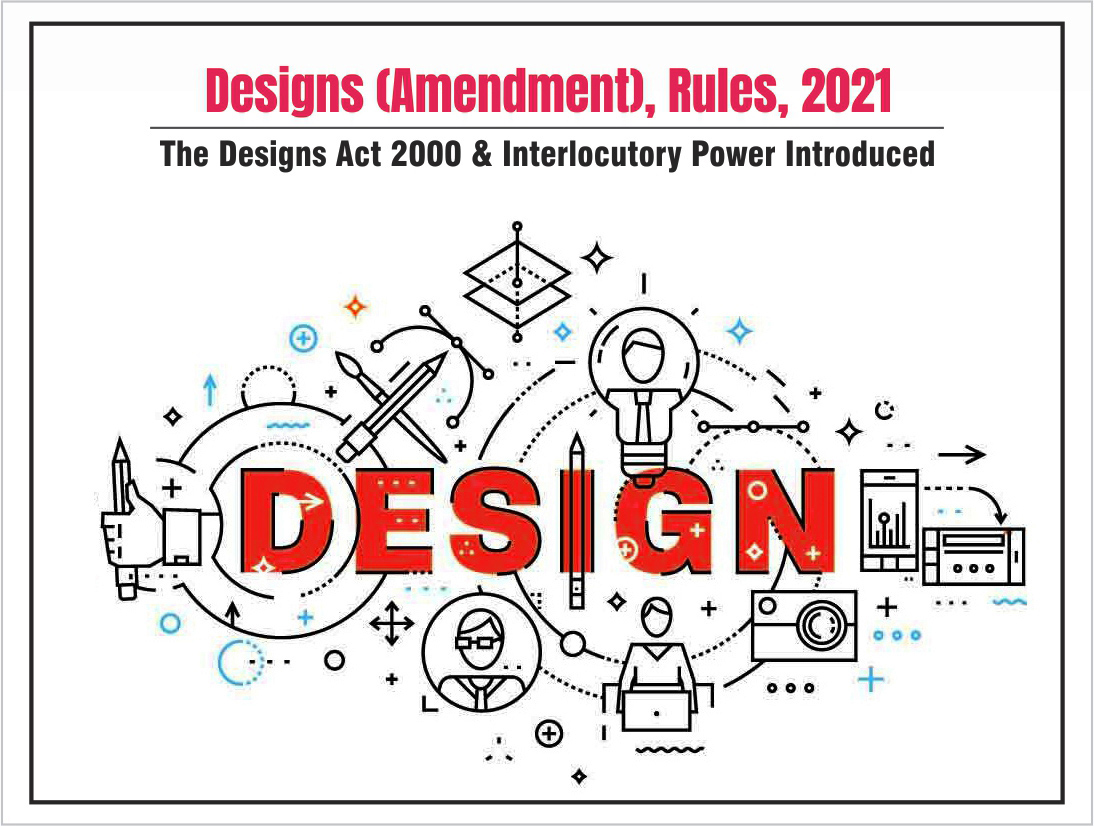 Industrial design constitutes ornamental aspect of an article. It consists of three or two dimensional features such as shape, configuration, pattern, composition of lines or colours applied to any article by any industrial process or means, whether manual, mechanical or chemical, separate or combined, which in the finished article appeal to and are judged solely by the eye. A design does not include any mode or principle of construction or anything which is in substance a mere mechanical device, and does not include any trade mark as defined in clause (v) of sub-section (1) of section 2 of the Trade and Merchandise Marks Act, 1958 or property mark as defined in section 479 of the Indian Penal Code or any artistic work as defined in clause (c) of section 2 of the Copyright Act, 1957. The owner of a registered design has the right to prevent third parties from making, selling or importing articles bearing or embodying a design which is a copy of the protected design in case such an act is undertaken for commercial purpose. At Knowledgentia, we offer all services relating to property registration in India which also includes intellectual property registration and hence Industrial Designs as well. Apart from protecting our client’s locally, we also offer Global IPR Protection services with respect to industrial designs.In India, we have the Designs Act,2000 that governs all legal aspects in relation  to filing, registration and enforcement of designs. As per the new design (amendment) rule 2021, for the purpose of design registration, the designs are classified as per current edition of International Classification for Industrial Designs (Locarno Classification)” published by World Intellectual Property Organization (WIPO). Knowledgentia being the Best corporate international law firm in India can offer all services as per current amendments and laws in each jurisdiction

The legal proceeding pertaining to the piracy of design runs as per section (22), of the design act 2000.

Section 22(4) states that “where any ground on which the registration of a design may be cancelled under Section 19 has been availed of as a ground of defence, the suit shall be transferred by the court, in which the suit is pending, to the High Court for decision”. More particularly, Section 22(4) imposes artificial suspension of authority of the court of first instance wherein it prescribes a compulsory transfer of the matter to the High Court when a design infringement suit is initiated before a court of first instance. The Defendant, as part of its defence, may rely on the grounds mentioned in Section 19 of the design act 2000 that assail the Claimant’s registration. Once the defendant raises grounds which are mentioned in the act for cancellation of the registered design, the court of first instance, where it is not a High Court, is enforced by Section 22(4) to transfer the suit to the High Court for further decisions. Nevertheless, for the commencement of such transfer, a request may be made by the parties, usually in the form of an interlocutory motion.

The condition for a Section 22(4) transfer must be invoked by the Defendant via a pleading. The pleading itself need not be the formal written statement filed against the infringement claim but it can be any pleading which particularly invokes the grounds of challenge, such as a reply to an interlocutory application.

The Supreme Court has stated that such transfer is a “ministerial act”, since the Defendant has a right to seek cancellation of the design which necessarily mandates the transfer.

As a matter of fact, the transfer of the cases under Section 22(4) to the high court is justified only when High Court receiving the infringement suit considers the viability of Section 19 at the interlocutory stage, as these grounds are the key drivers of the transfer in the first place. It is imperative on the transferee High Court to consider the viability of the Section 19 grounds, else it would Defendants can use Section 19 grounds to defend themselves against a permanent injunction but not an interim injunction.

It can therefore be concluded that the imposition of Section 22(4) protects the intellectual property right on one hand but on the other it immediately terminates the jurisdiction of the court of first stance on the ground of Section 19. This statutory transfer of case is a unique provision in Indian intellectual property law that forces a delicate balance upon courts receiving infringement claims. The court must deploy their wide range of interlocutory powers to do justice to the claims before them but must step aside immediately upon the invocation of the Section 22(4) transfer. However, any execution of interlocutory powers exercised in reference to Section 22(4) will be prone to differing quality of adjudication between different types of infringement claims. Since Knowledgentia is the Best law firm in India, our clients fully trust us with handling their intellectual property no matter how complicated the situation is.

Few case laws in this context are hereasunder: